There’s no doubting that construction is a major contributor to the UK economy, with 6% of GDP coming from the sector. But what is the state of the current climate, and what opportunities will civil engineering benefit from in the next 12 months?

Are there opportunities in the construction sector?

A ‘Constructing the Future’ survey published earlier this year revealed that 60% of respondents were “optimistic about the future of construction,” stating that no matter the ups and downs, builders and the building industry are still needed. This positivity stemmed from government investment in major projects such as HS2 and Crossrail. 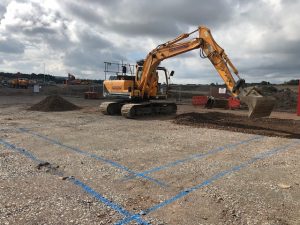 However, uncertainty surrounding a no-deal Brexit has resulted in building activity falling in September. Despite these concerns, the corporate sector reportedly has ample cash reserves waiting to be deployed if the risk of a no-deal Brexit subsides. This means opportunities could be plentiful as we head into 2020. Potential opportunities include:

High Speed 2 is a planned high-speed railway intended to connect 21 destinations in the United Kingdom. In 2017, parliament approved plans for the first section, starting with clearance work for the proposed stations and lines. Other sections are still awaiting approval, but the potential here is enormous.

Civil engineering works have been delayed from the original date of November 2018, but the civil aspect of the project is reportedly worth approximately £6.6 billion for Phase 1. Preparation will include drilling over 8,000 boreholes.

Birmingham’s Big City Plan is a 20-year project designed to transform the city into a leading destination, attracting more investment, business and enterprise to the West Midlands. Work is ongoing, but plans include improved transport connectivity, 28km of new routes for cyclists and pedestrians, better public transport throughout the region and over 5,000 new homes to cope with the growing population. This ambitious project has opened up a number of opportunities as well as some excellent engineering jobs in the area. Alongside HS2, civil engineering jobs in the West Midlands are looking bright.

Is the future uncertain?

Other than major projects such as HS2 and the Big City Plan, it’s currently difficult to predict the potential opportunities for the civil engineering sector in the short-term. In a letter addressed to Prime Minister Boris Johnson in August, the Construction Products Association (CPA) highlighted its forecast for the construction industry based on the outcome of Brexit. Should the UK’s departure from the EU run smoothly (with a deal), it predicts construction output could rise by over £1.2 billion by the start of 2021. However, should the UK leave the EU without a deal, CPA believe we could witness a fall of £10.5 billion in the same period.

Ultimately, at Lydon Contracting, we believe it’s hard to fully predict what other opportunities will be available in the next 12 months, but a good Brexit deal could see the announcement of some exciting projects.